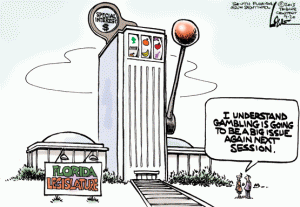 The dream of expanded gambling in Florida seems to be on hold for 2014 as: “House Speaker Will Weatherford said that his chamber would not act without legislation coming in concert with a constitutional amendment that would allow voters to weigh in on any possible gambling expansion”.

This does not bode well for the pro-expansion folks. There are so many unresolved issues in the Florida gaming market: racing issues, regulations, dogs, decoupling and more.  Most importantly, the Seminoles have to be reckoned with as they have a lot of clout in Florida (to the tune of 200M a year) and are not about to see their monopoly of table games threatened.

Until all these issues are contended with by the Legislature there will be no changes to the Florida gambling landscape in the foreseeable future.